Optimal Lighting for a Reef Aquarium

The proper light for the reef aquarium is important not only for coral growth and health, but for the overall functioning of the food web. A large number of organisms involved in nutrient recycling depend on light for survival. Photosynthetic bacteria, photo-autotrophic protists, cyanobacteria, diatoms, phytoplankton, zooxanthellae and algae perform photosynthesis to feed and build their tissues. To understand how corals take advantage of light, it is important to know that, for biological purposes, there is no difference between the light emitted by a HQI bulb, a T5 fluorescent tube or a LED fixture. In all cases it is a photon flux, which is used by zooxanthellae to perform photosynthesis, providing food to the coral.

Figure 1 shows the irradiance pattern according to time of day and sun elevation on an Australian coral reef. Phases of dawn, day and dusk are depicted. To follow this pattern in an aquarium setting, dimmable lights are required.​ 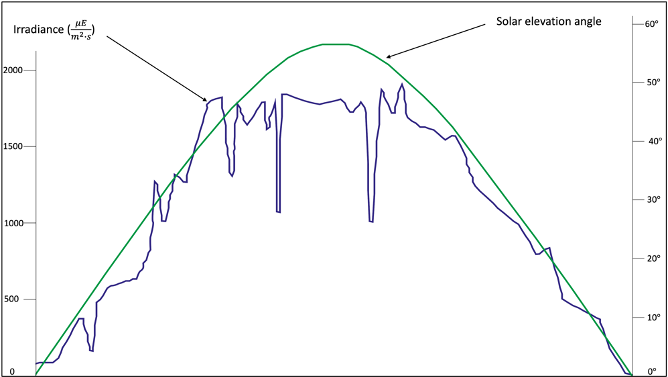 Depending on its location on the coral reef or in the aquaculture farm, a coral will be adapted to certain lighting conditions and water movement. In the ocean, depth determines the amount and type of light that strikes the zooxanthellae. This light is subject to very small variations. Variations are determined by the time of day, movement of clouds, water turbidity or sea swell intensity. Corals, anemones and giant clams respond very poorly to sudden increases in light intensity, so light acclimation is necessary before placing them in their final spot within the aquarium.

Corals located near the water surface receive a large amount of solar radiation and are forced to reduce their zooxanthellae population to reduce oxidative stress. This reduction results in a much lighter coloration. However, corals in deep zones, in order to maintain the same photosynthesis rate, must develop a higher density of zooxanthellae, presenting much darker shades. Another factor that significantly affects the coloration of corals, anemones and giant clams are the protective pigments they develop in response to UV and intense light radiation. These pigments provide them with very attractive colors, in shades of blue, mauve, yellow or pink, and their function is to reduce oxidative stress. In the reef aquarium, intense lighting, within reasonable limits, favors the formation of these pigments and the corresponding associated colors. These colors are a natural response and are consolidated when environmental conditions are extraordinarily stable. Frequent changes in the location of corals into a reef tank greatly limit the development of these pigments.

Light is an electromagnetic radiation that has the same nature as radio or cell phone signals. The energy carried by a light source is inversely proportional to its wavelength, i.e., the longer the wavelength the lower the energy. If an electromagnetic radiation has a wavelength between 400 nm and 700 nm (1 nm being one millionth of a millimeter), it is perceived by the human eye in the form of light and colors. Each color corresponds to exactly one wavelength. This electromagnetic spectral range is known as the “visible spectrum”. Light from the sun carries all the wavelengths of the visible spectrum and additionally those corresponding to infrared and ultraviolet. Ultraviolet radiation is located before 400 nm and infrared radiation after 700 nm, i.e., at the borders of the visible spectrum above and below. The approximate equivalences between wavelengths and colors are described in Table 1.​ 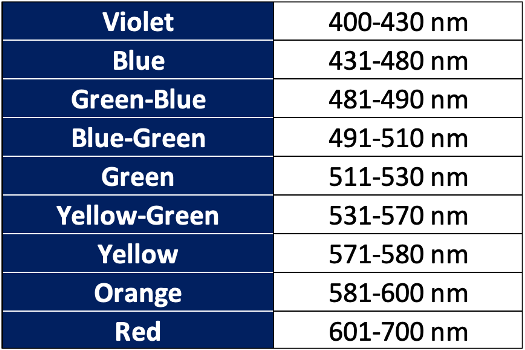 Table 1. Equivalence between wavelengths and colors

Figure 2 shows a plot of the spectrum of the average solar radiation incident on the ocean surface of a coral reef at the brightest time of the day. 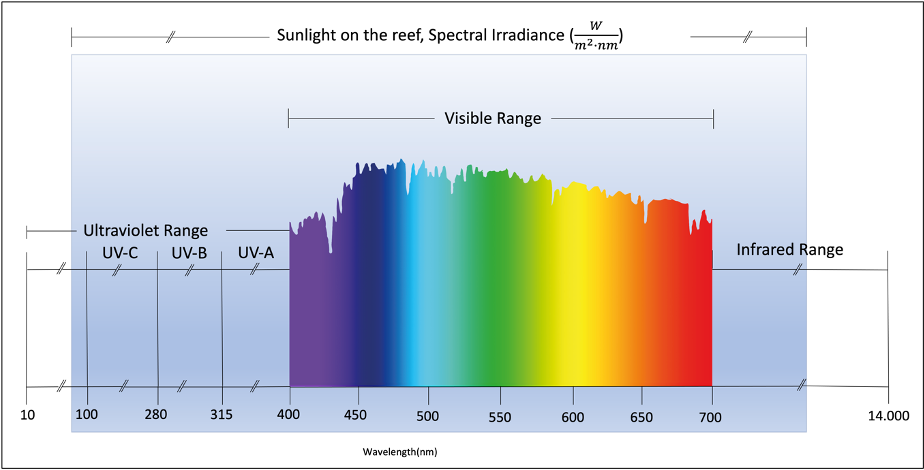 Figure 2. Solar radiation incident on the ocean surface of a coral reef

As light penetrates the ocean it interacts with water and organisms. Shorter wavelength colors (blue) with higher energy are able to penetrate deeper than longer wavelength colors such as red. As a result, when depth increases the available light becomes bluer and less red. The spectrum of sunlight that reaches fish, corals and invertebrates submerged in the coral reef would be the result of combining the data from Figure 2 and Figure 3. This spectrum is represented in the Figure 4 and corresponds to the existing light at about 5 meters depth. This would be the type of lighting pattern you would use if you were trying to replicate nature in your reef tank. 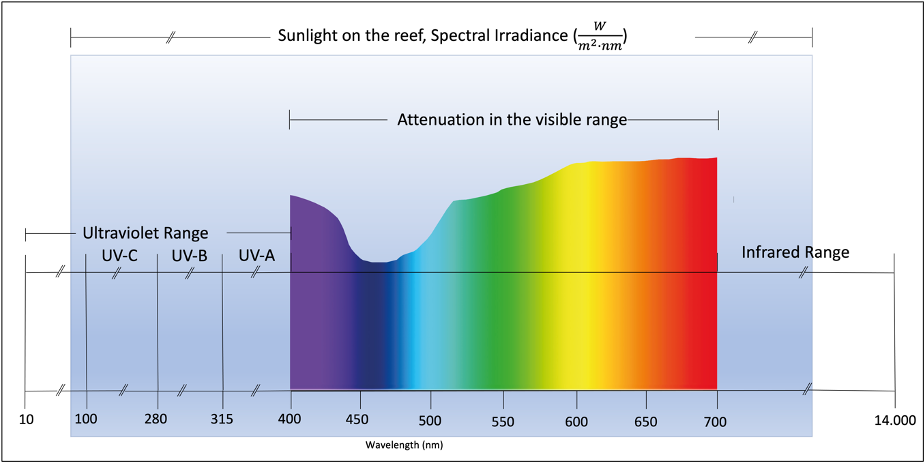 Figure 3. Attenuation produced by seawater according to light wavelengths. 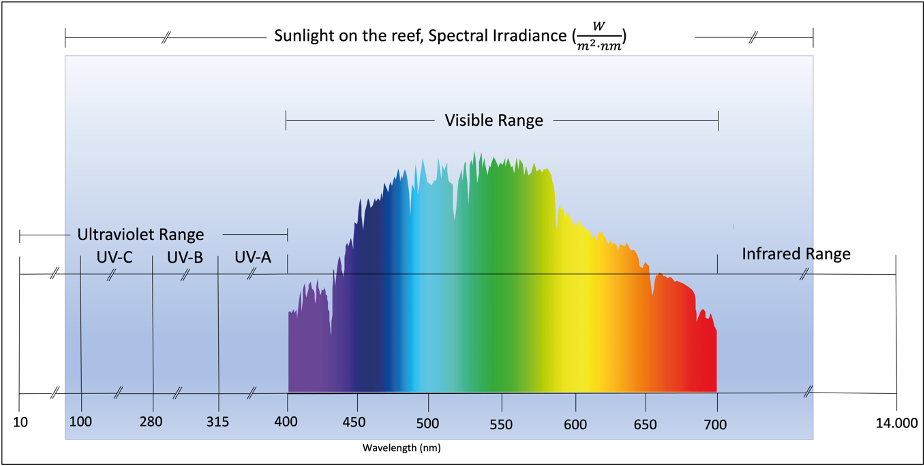 Figure 4. Spectrum of light existing at about 5 m depth in a coral reef.

However, there are other important considerations that make this spectrum less than optimal for aquarium lighting.​
Zooxanthellae do not use all colors equally for photosynthesis. For solar radiation to be transformed into available energy for photosynthesis, it is necessary for organisms to possess certain absorption pigments. These pigments would be a kind of “organic photoelectric cells”, i.e., molecular structures that absorb certain wavelengths, converting light energy into chemical energy. The most abundant absorption pigment among photosynthetic organisms is chlorophyll, present within zooxanthellae in the A, B and C forms. Zooxanthellae also possess carotenoid absorption pigments, such as beta-carotene, peridinin and diadinoxanthin. The absorption response for all these pigments is very high in the violet/blue (400-500nm) and red (650-700 nm) range, ensuring that all available light on the reef is utilized. In figure 5 we can verify that the range between 550 nm and 650 nm (green and yellow colors) is of rather little importance for the metabolism of these symbiont algae. Therefore, in our aquarium lighting system, we can greatly reduce the green and yellow colors without significant impact on the biology of corals, clams and invertebrates harboring zooxanthellae.
​ 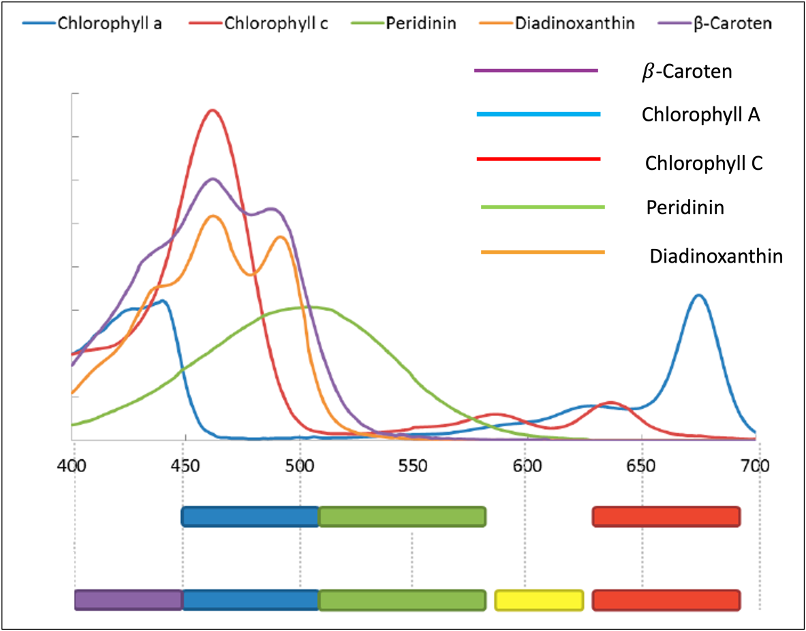 The type of light depicted in Figure 4 has everything biologically necessary for the health of fish, corals, invertebrates and the associated food web of a reef aquarium. However we can optimize this spectrum by reducing greens, yellows, oranges and reds, without any detrimental effect on fish, corals and invertebrate’s health. The reduction of wavelengths near to red, not only protects our corals from oxidative stress, but also minimizes the probability of occurrence of unwanted algae. In tide pools, close to the reef, the light received has a large amount of red color, which is used by hair and macro algae for colonization and growth. The same thing can happen in the aquarium if a lot of red-light radiation is used.

Figure 6 shows what the reference light spectrum would look like for reef tank application. HQI bulbs, fluorescent tubes and commercially available LEDs fixtures are designed to provide this spectrum to a greater or lesser extent, with slight modifications. Taking this spectrum as a baseline, if we wish to recreate shallow areas or even intertidal pools, it is recommended to increase the content of green, yellow and red colors. In the case of recreating deeper areas, we can reduce the greens, yellows and reds as much as necessary, without limiting the health or growth of the corals, giant clams and invertebrates.​

As an example, Figures 7 to 10 show the spectrum provided by the manufacturer Giesemann in four HQI bulb models, together with their corresponding color temperature. We verify that the color temperature increases with blue light content, decreasing when there is a greater amount of red and yellow components.​ 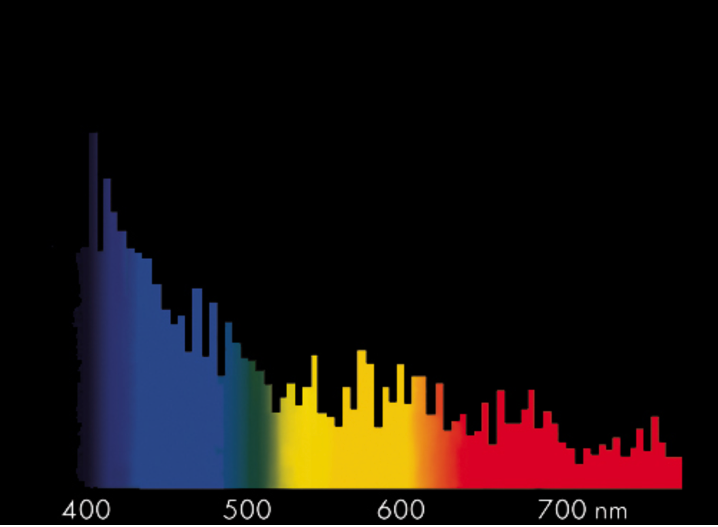 Figure 7. HQI Geisemann Megachrome Marine. 12.000 ºK. With "rippling sun reflection effect”. There are a lot of red and yellow components. 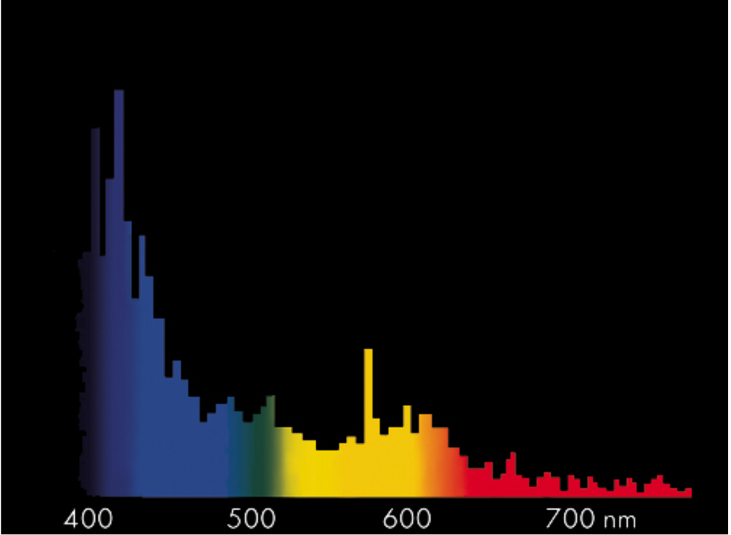 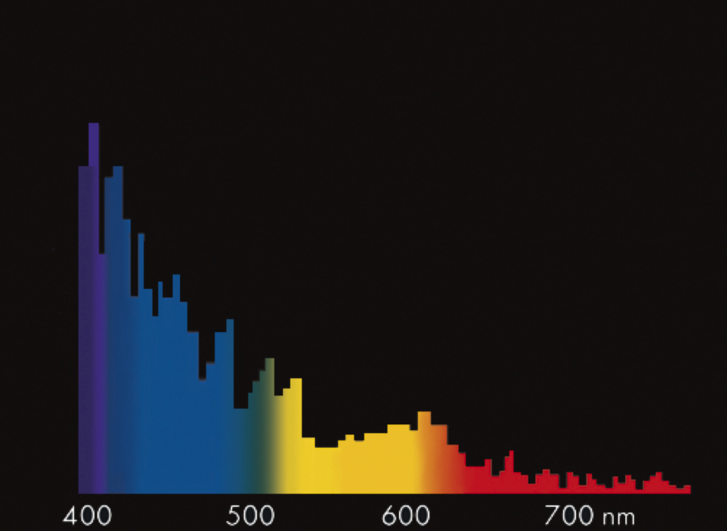 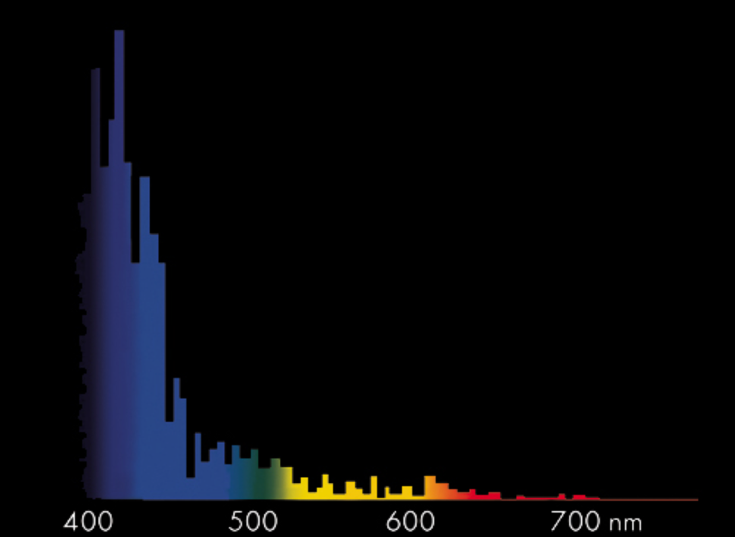 Figure 10. Geisemann Megachrome Blue. 22,000 °K. “Accentuates the blue components effect”. There is a significant decrease in the red, yellow and green components, producing a blue-dominant light with high color temperature.

In Figure 11 (below) the spectrum provided by a Ecotech Radion XR30w G5 LED is also depicted. We can see that the spectrum is similar to the one in figure 6, which is the reference spectrum, as explained. 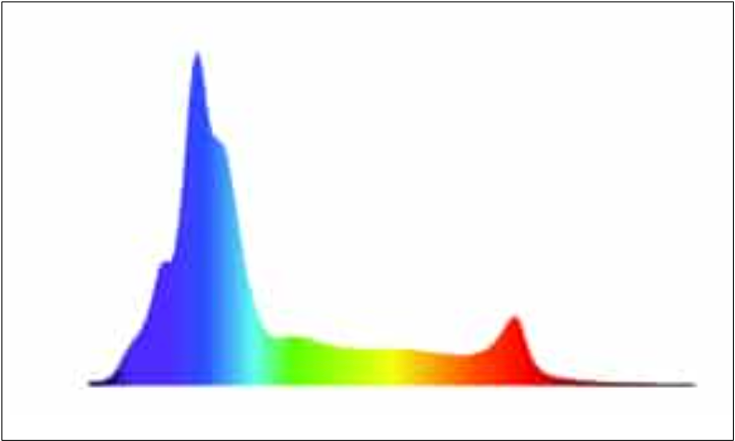 When an aquarist wonders what type of light is appropriate for a reef aquarium, the immediate tendency is to mimic as closely as possible the natural light that fish, corals and invertebrates receive in nature. The spectrum of this light includes many of the colors that the human eye is capable of perceiving, for example violets, blues, greens, yellows, oranges and reds. However, zooxanthellae do not use all of these wavelengths equally, but mainly colors close to blue and red. It is therefore possible to decrease the intensity of colors close to green, yellow and orange, without having a negative impact on their health. On the other hand, we know that intense red light causes great oxidative stress in corals and additionally, and favors the appearance of unwanted algae in the aquarium. Also, blue light produces in corals a higher rate of photosynthesis and a higher density of zooxanthellae than red light. The optimal spectrum for a reef aquarium therefore has a large amount of blue light, with other colors such as green, yellow, orange and red, significantly reduced with respect to natural light.

Angel Cegarra is the author of "Reefkeeping Fundamentals". He has traveled to destinations such as the Red Sea, Indonesia, the Philippines, Australia and the Pacific Ocean teaching underwater photography at diving centers. He is passionate about anemones, algal refuges, deep sand beds and cryptic zones.