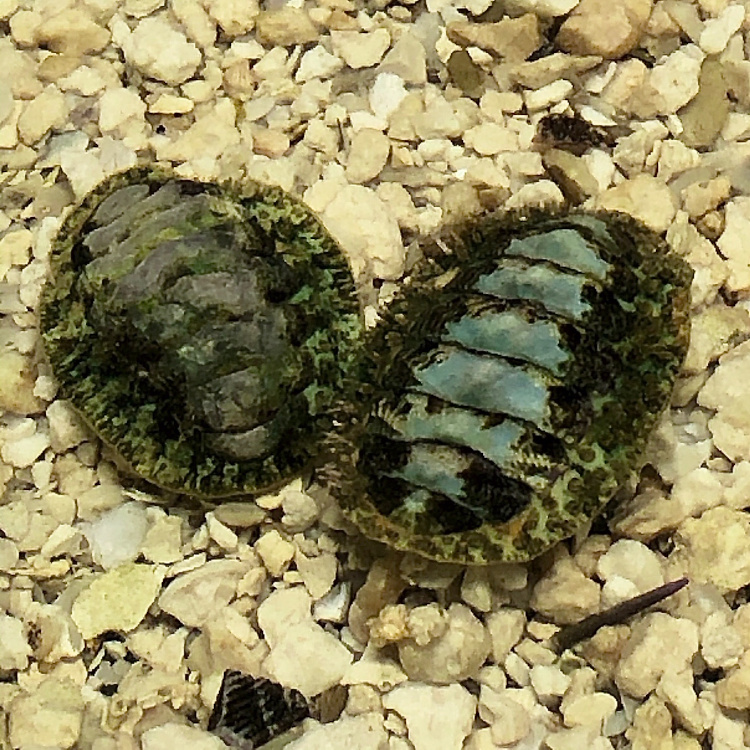 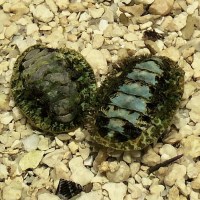 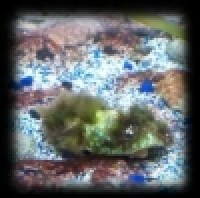 Species Availability:   No stock
$6.00
Ask a question about this species

This primitive creature is not a species of snail, the Fuzzy Chiton is a species of Chiton, which is a type of gastropod. Chitons have been around since the dinosaurs, and have withstood the pressures of evolution with a rather unique defense and survival system.

Instead of a shell that the Chiton can retract into, like those found on most snails in the aquarium hobby, Chitons have 8 plates on their back that are comprised of a living aragonite cartilage like material. The plates can be shifted to harden when the Chiton is latching down, or can go soft as the Chiton cruises over jagged rockwork. Chitons have many eyes around the entire perimeter of their body rather than 2 in a frontally arranged direction. They don't process vision the same way we do, but are limited to seeing only light or dark like most gastropods.

Fuzzy Chitons are strong. When they attach to something they can sometimes be hard to remove. You must be careful when trying to move them, as it is possible to harm the Chiton if you are too rough. If possible, refrain from moving or disturbing them unless you absolutely have too, like during a tank move. In those cases, try nudging the chiton sideways with an item similar to a credit card, hopefully breaking the suction cup like seal the Chiton has made. Never try to pull them backwards from the surface they are attached to, breaking the seal in that way would kill the Chiton; they latch on that firmly. This strong suction cup like grip keeps the chiton firmly attached in the most turbulent environments and safe from fish attempting to dislodge it to feed on their softer underside.

The Fuzzy Chiton gets its name from the moss like algae that is usually growing on its back. This serves as camouflage for the Chiton, who will live in these patches and "farm" the area, moving in circles to keep a steady rotation of algae. Fuzzy Chitons do not usually eat the camouflage off of other Fuzzy Chitons. The algae is very unlikely to spread in your tank, but you can remove it from the chiton's back if you would like. Blue leg crabs and many of the snails we sell will remove the algae from the back of the Chiton even if you wanted to keep it.

The Fuzzy Chiton begins eating at twilight and will consume algae throughout the night until the lights come on, spending most of its time on the rocks and glass in your aquarium. The Fuzzy Chiton is known to stay in one spot until all the algae in the spot is removed. They are excellent at removing diatoms, cyanobacteria, film algae, hair algae and some types of low lying complex macroalgae in the turf algae category.

Chitons have difficulty righting themselves if they become overturned in soft sand. It is unlikely they will get flipped once they get used to the aquarium, but during the first week they may become disoriented and end up on your sand where they are vulnerable to being overturned. In this event,  you should place them, (orange side down), on a hard surface, such as the rock work in your aquarium. In short time your Chiton will have the aquarium mapped out, and will give you little trouble over its relatively long lifespan.

Chitons prefer stable aquarium systems with low levels of nitrates. These chitons can live up to 3 years in captivity, and they range from 1''-3''. Most of the fuzzy Chitons we send are between one and two inches. We prefer to send the smaller Chitons because they have higher survivability in shipping than the adults.

This species requires UPS Next Day Air or Express Mail and does not qualify for free shipping.